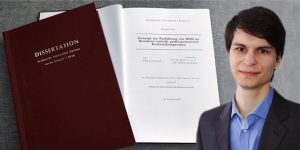 Abstract of his dissertation:

HDR (High Dynamic Range) makes it possible to capture a much larger contrast range of a scene than would be the case in HD broadcast. As a result, details can be preserved in both the highlights and the shadows. The typical problem of overexposure or underexposure in individual image areas can thus be solved.

However, the playback options are very heterogeneous and usually much more limited, e.g. when it comes to achieving good downward compatibility with today’s existing systems. In order to still allow all viewers to benefit from the increased recording quality, an adjustment – also called contrast compression – is necessary. Manual techniques for contrast compression are known from film post-production (grading, secondary color correction), while automatic methods are used in computer graphics (tone mapping). However, due to the special requirements of broadcast, these cannot simply be transmitted. In addition to real-time capability and robustness, a fundamental challenge is the preference of the viewer.

The aim of the work is therefore to quantify the audience preference with regard to brightness and color perception and then to offer an algorithmic solution to adapt the contrast compression for broadcast applications based on these results. Today this system is also known under the name EVI (Enhanced Video Imaging). With the help of objective and subjective examinations, it can be shown how the image quality can be significantly increased in this way. Finally, it is important to show a way for the widespread introduction of HDR using exemplary workflows and field tests.